Haaland is believed to want to move to Real Madrid but the Spanish side will not make an offer for the player and will wait for him to make the first move and signal his departure from Dortmund. (AS – in Spanish)

Arsenal may have to consider selling young stars such as England winger Bukayo Saka, 19, to raise the funds to sign Real Madrid’s Norway midfielder Martin Odegaard, 22, permanently, as well as other new players to overhaul the squad. (Sunday Times – subscription required)

Manchester United will have to hand top earner David de Gea a huge pay-off with the 30-year-old Spanish goalkeeper set to leave Old Trafford in the summer. (Sunday Mirror)

Paris St-Germain and Argentina striker Mauro Icardi, 28 is emerging as a target for Manchester United as a long-term replacement for compatriot Edinson Cavani, 34. (Teamtalk)

Everton are interested in signing Juventus and Argentina forward Paulo Dybala but the 27-year-old will turn down any approach from the Toffees. (CaughtOffside)

Atletico Madrid are keen to sign Tottenham and England midfielder Harry Winks, 25, who has been struggling for playing time under Jose Mourinho. (Sky Sports)

West Ham manager David Moyes is not concerned that the current loan deal for Manchester United and England midfielder Jesse Lingard, 28, does not include an option to buy. (Mail on Sunday)

Former Chelsea and England captain John Terry, who is part of the backroom team at Aston Villa, has emerged as a contender for the vacant Sheffield United manager’s job. (Sunday Mirror)

Barcelona are considering a summer move for Real Betis’ France international Nabil Fekir but the 27-year-old has also been linked with Arsenal. (Estadio Deportivo)

Juventus’ French midfielder Adrien Rabiot, 26, who has been linked with Everton, could also be a target for Barcelona. (Calciomercato)

Eddie Howe will look to bring in Bournemouth captain Steve Cook, 29, if he is named Celtic boss. (Sun on Sunday) 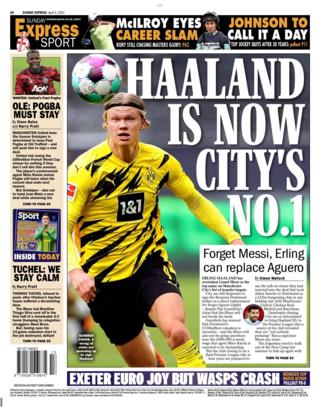 Dybala’s future at Serie A champions Juventus is uncertain

Man Utd will explore the possibility of signing Declan Rice