Barca are also monitoring Cesar Azpilicueta’s situation at Chelsea. The Spain full-back, 32, is in the final eight months of his contract and the Spanish side are targeting free agents as a result of their financial difficulties. (ESPN)

Barca’s bid to sign England winger Raheem Sterling from Manchester City on loan in January “doesn’t look easy” because of their financial situation and the 26-year-old’s wages. (Sport – in Spanish)

Juventus are keen to offload 21-year-old Sweden winger Dejan Kulusevski and while a swap deal with Arsenal for Ivory Coast winger Nicolas Pepe, 26, has been suggested, the Italian club prefer cash. (Calciomercato – in Italian)

Newcastle United are keen on Monaco and France midfielder Aurelien Tchouameni, 21, who is also wanted by Chelsea, Liverpool and Manchester City as well as Real Madrid, Paris St-Germain and Bayern Munich. (El Nacional, via Sun)

Nuno Espirito Santo is keen to make a quick return to management in the Premier League after being sacked by Tottenham but his agent is also teeing up a move to France with Lyon and Lille possible destinations. (Sun)

Leeds United, Wolves and Burnley are considering a move for Reading’s 26-year-old former England Under-21 midfielder John Swift, who has also been a long-time target of Sheffield United. (Sheffield Star)

AC Milan have joined Chelsea and Atletico Madrid in pursuit of France Under-21 forward Mohamed-Ali Cho, 17, from Angers. (L’Equipe – in French)

France striker Alexandre Lacazette, 30, and former England Under-21 forward Eddie Nketiah, 22, are set to leave Arsenal when their contracts expire in the summer. (Football London)

Crystal Palace and Borussia Monchengladbach are interested in Nketiah, who has told Arsenal he wants to leave the club. (Mail)

Sevilla’s France centre-back Jules Kounde, 23, says Chelsea’s failed bid to sign him in the summer has had an impact on his performances this season. (Telefoot, via Goal)

Senegal midfielder Nampalys Mendy, 29, wants to leave Leicester City but says he “has to be patient” to get his wish. (APS, in French)

Birmingham City have offered a professional contract to England Under-18 midfielder George Hall, 17, as they look to fend off interest from Leeds United. (Football Insider)

Inter Miami coach Phil Neville has cut 10 players from his squad after missing out on the MLS play-offs and his son Harvey, 19, is set to be promoted to the first-team squad for next season. (Sun)

Napoli are working to extend the contract of 22-year-old Nigeria striker Victor Osimhen, whose current deal runs until 2025. (Gazzetta dello Sport – in Italian)

Real Madrid want to extend 36-year-old Croatia midfielder Luka Modric’s contract by a year so it runs until 2023. (Marca)

Juventus are expected to announce an extension to Argentina forward Paulo Dybala’s contract by the end of the month, having already agreed a deal with the 28-year-old. (Tuttosport) 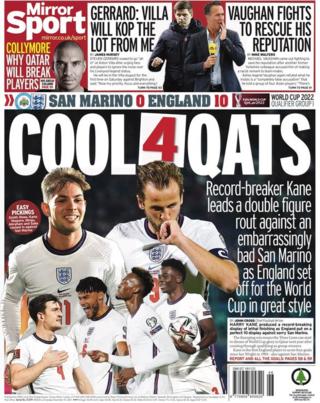